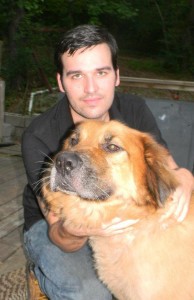 Theo was a mountain of a dog.  The vet  decided he was half Great Pyrenees and half Chow. When Jack first adopted him he was a very dangerous dog and bit any one who approached, especially if they wanted a hug.

But Theo lived a long time, especially for such a big guy, and slowed down over the years. The last person he bit was a roofer who didn’t stop when Theo barked (he only gave one warning, if you stopped… he stopped. If you tried to move past him…….).  I got home after work around six and the roofer was still on the roof waiting. He wouldn’t come down until I put Theo in the house.  Fortunately, the roofer had on two pairs of  jeans and Theo had very few teeth left.

Like most people, I waited too long to take Theo to the vet to have him put to sleep. The last year of his life (he was 13 years old and 125 pounds) he didn’t move much, smelled bad, every thing hurt and he didn’t even enjoy chasing cars as they left the drive way.

On a Saturday morning I decided it was time.  He was so old he couldn’t get in the back of the truck anymore, so we built a ramp and pushed him up. Once in place he was so happy because rides were always his favorite. As usual when we drove through town people smiled and pointed at Theo because he looked magnificent, massive and regal as though holding court. He loved the adoration of the people.

I cried the entire ten miles, but Theo was in a great mood.  After parking the truck at the vets office, I started to grab our make shift ramp but Theo did something he hadn’t done in five years. He bolted over the back of the tail gait, his enormous body was completely airborne! Then he trotted to me so I could pick up his leash.

Theo pawed the door twice anxious to go inside. He generally didn’t like going to the vet’s office but today he was ready to roll.  I was told by the nurse we would have to wait a few minutes so we walked outside.  I was sniveling, wiping my face on my sleeve and telling my dog how much I loved him. But Theo was unimpressed by my misery. 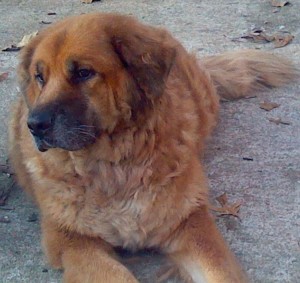 There was a little creek next to the parking lot and for the first time in ten years Theo wanted to play in the water, like a stupid puppy. We had taken this dog to the lake and to creeks countless times over the years and he HATED getting wet.  He would do anything to avoid even getting his saucer sized paws damp. But today was different. My tears had stopped because of Theo’s shocking behavior. He was giddy with joy. He smacked at the water then started biting the bubbles he created.

“We’re ready for you, Ms. Hampo,” the nurse called and Theo literally charged  the building, nearly dislocating my arm. He bulldozed past the nurse and went straight into the examining room.  I started crying again as I knelt down I held his huge red head in my hands, looked him in the eye and knew he knew exactly where he was going and this was Theo’s best day ever.

(As always I love love love your comments and if you like Hampoland and know an agent or publisher…..)

One thought on “Theo’s Last Miracle”