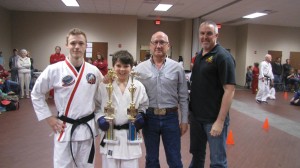 Last weekend Sandor had a Taekwondo tournament. He gets so nervous before tournaments.  As we drove the forty five minutes  he twitched and squirmed. He asked me every possible question about what I thought might happen. Even though he knew there was no way for me to know how big his division would be, who the judges might be, who he might go up against, how big the room would be or how many folks would be in the audience.  Every tournament is different.  Sandor has been training in traditional Taekwondo since he was three, nine years, he knows the routine, still he questions and speculates constantly, a pickle jar full of nerves.

His older sister, Lexie, was  the opposite. Before tournaments, competitions or testings, she was always excited, dancing around listening to music, totally relaxed.

Once we arrived at the gym and he was dressed out in his uniform he was still almost too nervous to stretch.  He tried. But he kept returning to my side.  He stood too close and bumped up against me  while intently watching everything going on in the room.

Then they called his division. Straightening his uniform he lined up side by side with his competitors. Some were bigger some were smaller, but they were all fairly close in age. He looked calm and confident.

For the next forty five minutes he competed in forms and sparred the other kids.  He was just about flawless. He took his time and had great timing and power on his form. He spared a bigger kid first and I was worried.  He was down two to zero but he kept his composure, then he did what he’s been trained to do and scored five straight points to win the match.

He ended up winning first and first in forms and sparring and I was so proud, not because he won, though. I was proud because my son has learned to put his nerves in a jar.  Taekwondo has taught him to be stronger than his fear, so he doesn’t end up beating himself. That’s an extraordinary ability, most of us struggle with all our lives.

And the boy has learned to take a punch.  During his first match the other kid scored the first two point with straight punches right to his face.  The kid was bigger and taller than Sandor so they were really solid punches. The second punch was so hard he actually had to readjust his head gear and mouth piece.  But he didn’t fall apart, he didn’t cry or snivel or let fear overwhelm him.  Instead, he kept his composure, shook it off and got to work.

Five years ago he would have teared up, gotten furious and embarrassed. You can’t fight when your emotions are incharge.  But this time he just bumped gloves with the other kid, as a way of saying “good shot”, then went back to work.

Our version of Taekwondo doesn’t sit well with some people.  We allow high ranks to punch to the face, because in real life, thugs punch you in the face.  And we don’t pull punches and kicks.  You never try to punch or kick you opponent with full power but you’re allowed to hit folks pretty hard. That’s the best way to learn defensive skills. You better keep your hands up. At the end of every sparring match the judges raise the hands of the fighters, “This time, next time.” It’s pretty black and white.  But so is life.

But this version of Taekwondo has served my family so well. Taekwondo has taught Sandor how to take a punch.  He knows there’s a difference between something hurting and actually getting hurt. He’s learned to shake it off and keep a clear head. That’s an invaluable life lesson.

And finally, Taekwondo tournaments are a great class room because kids get to watch other kids win and lose. When a ten year old boy throws a fit and acts like a three year old when he loses it’s embarrassing. Everybody, including the other kids, think “That’s so not cool. I don’t want to act like that.”

A fighter who is cool enought to lose well looks awesome, looks stronger and more in control. Who doesn’t want to be that guy.

So, some might think our version of Taekwondo is too violent and aggressive.  but invaluable life skills are learned everyday. Life can be tough, very tough. But Taekwondo teaches kids to keep their composure, shake it off and above all….be respectful.

My kids may come home with a bloody nose but they know how to persevere in life, they can control their fear and nerves and shake hands like a man.