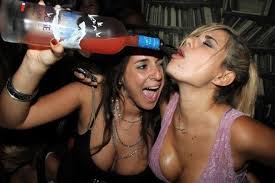 For years I have pleaded with my children, all of them, boys and girls, to stay the hell away from fraternities when they got to college. For years and years almost all the news about fraternities is bad. Can you name the last time you heard something good about a frat?

When I was in college the frat houses were home to the biggest, drunkest sloppiest parties on campus….every weekend. There were bongs and kegs everywhere. The fraternities had little paperback books with all the freshmen’s profile pictures and only invited the pretty girls. Nobody got carded and everybody got really really drunk.

From what I’ve been told by college kids recently…things are exactly the same.

If you put thirty unsupervised teenage boys in a house together what’s going to happen….bad things. So, why is anybody surprised by the horrendous behavior of these fraternities? I’ve said it over and over, teen age boys have more bad ides in an hour than the rest of us have in a year because their brain isn’t fully developed.  A grown man wants to throw the water balloon in the living room just as much as the seventeen year old. But he doesn’t do it, he goes outside to nail his buddy, because throwing it inside is a bad idea,  it’s wrong and he’ll get in trouble. That’s the difference between a boy brain and a man brain.

I have a friend who owns a low rent hotel close to a very pretty lake.  Recently he rented the entire hotel out to a fraternity.  He was paid with a national fraternity credit card.  They bought cases and cases and cases of whiskey and vodka.  They did over 20,000 dollars worth of damage to their rooms… but my friend wasn’t upset because the national chapter of the fraternity always paid for the damages.  It was all expected and taken care of. In face, my friend seemed almost pleased, I guess that’s how he paid for remodeling.

And that’s just what fraternities do.

When you put  unsupervised, well off and elitist boys in a house together….and you get sexism, racism, violence, arrogance and ignorance.

For the most part, frat boys are very similar, middle to upper class and white.  They avoid diversity (that’s generally seen as a bad thing), as a result they start thinking they are better than everyone else and more deserving of what ever they want. That’s human nature. If man were not an animal fraternities might work.

The question is why do we allow fraternities on our college campuses.  College is all about shaping these kids into smart, thoughtful and productive adults.  Is that what fraternities help us do? That’s not what those basement frat parties did for me. The real question is why would we ever want our daughters to walk inside a fraternity house and why do we want our sons to be part of that culture that thrives on and cultivates elitism, sexism and racism?

One thought on “The Ugly Truth about Fraternites”