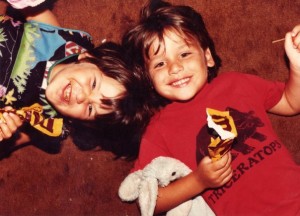 I couldn’t sleep last night.  At 3:00 am I realized my two oldest children, Jack and Mary, are getting screwed…big time.

When Lexie graduates from high school next month I’m going to host some sort of party/reception. Nice food, big smiles and pictures…cause I’m so proud of her!  I didn’t do that for Jack or Mary.  I think a bunch of us just went to dinner at Don Juan’s, ate too much cheese dip, and called it a day.

And several months ago I told Lex, if she gets a full ride to college we would buy her some sort of new/used vehicle.  She’s been driving a Ford Explorer that Mary totaled twice. It’s time to bury that thing.

Every single car we bought for Mary and Jack (or they bought for themselves ) was beyond crappy. They had terrible awful ugly cars. Because we didn’t have the money to buy them anything decent.

When Jack and Mary were in high school (and they both earned 100 percent full rides to college too) Alex and I made less money AND there were four kids at home. Sandor was a baby boy, Lexie was in elementary school and they were both in high school.  The pizza pie was sliced pretty thin back then, so nobody every got anything nice new.

When Jack and Mary were little they would split a single happy meal. Somebody got the fries and somebody got the burger. We ate things like “pizza toast” for dinner twice a week. That’s toast with red sauce and a slice of cheese.

Jack was in sixth grade the first time we bought him a sixty dollar pair of real basketball shoes…that didn’t come from Wal-Mart and it was a big damn deal.

Several times a year Mary and Jack would come home to a dark house cause the electricity had been shut off.   We’d always get it turned back on it just took some “doing.”…maybe a trip to the pawnshop with Alex’s 9mm.  (we always got the gun back).

Our life isn’t like that anymore. We make a little more money now and Jack and Mary are grown up. They take care of themselves.  So we have greater resources and fewer folks to take care of. That means Sandor and Lex live a blessed life compared to Jack and Mary.

Hell, last week I bought Sandor a 20 dollar yoyo and all he had to do was take out the garbage and wash my car.

But Jack and Mary also got different versions of Alex and Diana back then. Alex played basketball in the yard all the time with Jack. And they played hard. In fact I organized a father and son basketball tournament , Cobra Jam, just so my guys could show off their skills. Back then, Alex went on field trips and would even do garnish demonstrations at school for the kids.  I threw massive 4th and 5th grade Halloween parties and Alex scared little children till they peed. And I was enormously impulsive and funny. One night Alex came home and to find the kids and I were in the yard at midnight trying to create an ice skating rink. They had a pet snake one winter, so we went out and caught fifty frogs then froze them…… in the freezer. Yeah, there were frogs in zip locks jumping around in our freezer for almost an hour. I was the first one in line to jump off the high dive every summer and I’d spend hours squatting in creeks to catch crawdads with the kids.

We were pretty poor but we had a lot of energy and bad ideas back then. We were different versions of Alex and Diana. We’ve never been able to give the all the kids the same thing or the same experiences. Though I wish I could.

Actually, I don’t know which version is better but I do know we’ve given them all every thing we could, from pizza toast to graduation parties.  We’ve given them our everything, heart body and soul.

One thought on “My Oldest Kids Got Ripped Off In Life”