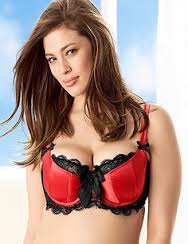 I’m going to lay it right out here, breasts in America are getting bigger. And I feel fairly certain it’s because we are all getting fatter.  Breasts are made of fat, so when a woman gains ten pounds her boobs get bigger.  Any woman will validate this fact.

But here’s more evidence of swelling boobage. I went shopping a couple of days ago and found myself surround by rows and rows of giant bras. I’m talking about massive bras with cups bigger than my son’s head.

I have pretty big boobs and have worn a 36 or 38 D for most of my life.  When I was a teenager they were considered gigantic, freakish, worthy of lengthy conversatons. Today that’s not the case, because so many women have boobs much much bigger and they lt them hang out there…all the time. Twenty years ago finding a bra that size was really hard and they were all ugly granny bras.  As a teenager I was sure all the bigger  bras had been designed by structural engineers and Baptist ministers. They might as well have been cut from burlap.  And the strap across the back was at least three inches, there’s no way that looked sexy.It was terrible.

Additionally, (as though buying a really hideous looking big bra when you are 15 isn’t bad enough),  most stores in the 70′s 80′s put the big bras on the lowest rack. So we had to search for our big ugly bras on our knees. Its no wonder I never wanted to go shopping.

Here’s a weird thought. When I was growing up bra companies bragged that their bras ‘lifted and separated.”  Back then we wanted our boobs to poke out separately …no touching.  Now boobs get smashed together to create cleavage. Well guess what, they get sweaty when you smush them together. And that’s not a really good thing.

The on going discussion about “side boob” is a new thing too.  When our old bras lifted and separated they had direction so side boob wasn’t an issue.

Life is better now for women with enormous ta-tas. Now, stores are filled with hundreds of glorious looking giant bras, shiny and sparkly and hot looking, even for those with boobies the size of basket balls.  Lots of bras, big enough to hold three puppies, are even kept at eye level because big boobs are the norm.

What does all this mean? Well, I’m really worried about the obesity rate in America , but I know there are a lot of “breast Men” in the world who love the new big ta-ta norm. So, at least for those guys the future is looking magnificent.

****If you want to read more about men and their evolutionary feelings about breasts this is a pretty interesting site.http://www.breastoptions.com/bigbreasts.html

#This is a re-written reprint because I went shopping again today and the bras were bigger and even prettier. Lucky me

2 thoughts on “Boobs Are Getting Bigger!”