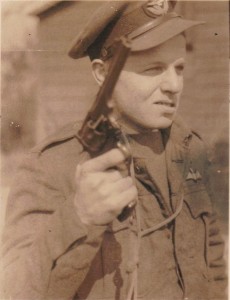 I’m rereading Slaughter House 5 by Kurt Vonnegut and stumbled across a line I didn’t understand before.  Vonnegut wrote about being free after the war. He is sent to France where they feed the soldiers “malted milkshakes and other rich foods until we were all covered with baby fat.”

My dad, I Granger McDaniel, told a funny/sad story about returning from the War. I was little when he would tell this story so I’ll probably have great big mistakes in this tale. Good news…you won’t know about them.

Once again, I’ve realized I’m the last one who is still alive in my family so I need to write down as many stories as possible for my kids. Once I’m gone….so are the stories.

Dad had been in the German POW camps for four years when he was suddenly freed.  Obviously, he was frighteningly skinny because he’d been  deprived of food for so long. And as the war progressed the rations became more and more meager.

Once a Red Cross package was delivered and a crazed young man in the barracks grabbed a whole pound of butter.  He ate it all at once before the other prisoners could get it away from him. The boy died a few hours latter and Dad was never sure why.

Once he was freed, Dad was delivered to London. In just a few weeks the British fattened him up so much he couldn’t button his pants.  His body was too happy to have food and held on to every calorie. As a result, after four years in a POW camp, he was a roly poly fat boy when he got home to Hot Springs, Arkansas. He said he could tell folks were a little disappointed by his appearance. They were expected a lean, prison hardened war hero.

After a few days at home Dad flew up to New York to see mom. Remember, they had been in love since third grade.  Mom had graduated from Vassar and was working as an actress and model in NYC. But they had written to each other throughout his four year prison stay and were already planning on getting married.

Typical of my parents, after a few days they got into a HUGE fight! Dad was so mad he actually flew back to England, thinking he still had a job with the RAF. But the war was over so dad found out they really didn’t need him. Everyone he had known in London was gone and he had no place to stay.

Depressed and lonesome he wandered through the streets of London in uniform. He’d been through so much but was still just a boy of 21 or 22.  It started raining as he walked on the cobblestone streets then suddenly he heard a shriek. Someone, a woman, was screaming to him, “Irvo! Irvo is that you? Irvo…up here!!!”  He spun around, looked up and saw an old fat woman with a great deal of make up, leaning out a third floor window, waving and flapping at him furiously. Walking back he realized it was the aging madam of a whore house he’d frequented. She took him in for a few nights until he found a way to get back to the States.

For years my mom and the madam kept in touch. As a child I loved the elaborate Christmas cards she sent  every year. In the seventies, my Mom toured Europe and tried to find the whore house and madam who took Dad in. But they were all gone. Nothing was left but the dark cobblestone streets of London.