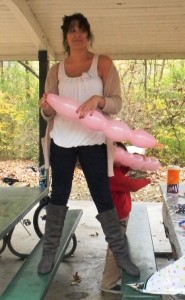 As a kid, Mary tried to play tennis, and several other sports, but they were all miserable and almost embarrassing failures.  She was a chubby,  beautiful, smart, spaz.

Mary was the kid who hit the ball over the fence and into the parking lot over and over again. I considered buying a Golden Retriever so I could stop chasing balls. Mary hated trying anything involving physical activity because she didn’t want to look like a dork.

Grade school for Mary was torturous. There were bullies, mean girls and lots and lots of tears.  There were years her  brother Jack was her only friend.  It just about killed me because I couldn’t understand why other kids didn’t “get her” they couldn’t see how smart and fun she was.

Since those days Mary has transformed herself. In high school she was convinced boys didn’t want smart girls, she was too tall, too big. She tried to make herself disappear and lived in giant hoodies or big frumpy semi-Amish dresses.

Then she got to college and discovered the truth, she’s stunning and  men love her. She saw in herself what we’d seen all along and started dressing and acting like a magnificent creature rather than a excessively dowdy “old school” librarian. This semester she’s even taking ballet and jazz…just for fun..

Yesterday, on the tennis court, the transformed Mary showed up. She was wearing , skinny jeans, knee high leather boots and  an upscale pink hoodie. But when I hit the tennis ball to her she hit it back. What the hell? Then she did it again and again, as though it wasn’t a big deal at all.

After a few minutes I walked to the net, “Seriously, when did you learn to almost play tennis?”. I was genuinely mystified.

She just shrugged and smiled, her lip gloss and confidence  sparkled in the sunlight. “”I quite caring what people thought and I stopped worrying about looking stupid. I can do all kinds of things I didn’t think I could”. 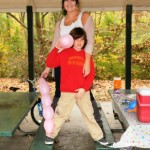 So for those of you who  are struggling every day to make it through grade school or high school …keep the faith.  The people who are mean to you are petty and inconsequential. Your day is coming and you will shine.

2 thoughts on “High School Sucks…Then It Ends! Frumpy to Fabulous”