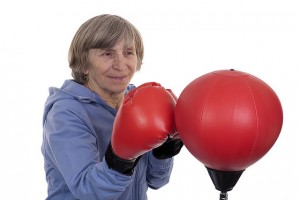 I teach a kickboxing boot camp class every week and I always walk away astonished.  I have three to seven folks, mostly women ages 30-45 show up smiling and ready to sweat.

When I googled pictures of women kickboxing they were ALL SUPER HOT BABES IN SPORTS BRAS. Not my kick boxers.

Several are in really, really good shape, better than me, and others are working on it. Most of my kick boxers are teachers at Lake Hamilton School and they inspire me ….because they don’t quit. They don’t complain, they don’t make excuses. They keep on going and getting better.

I have a friend whomy age and started Taekwondo. She always said her  goal was “to suck a little less every day.”

Instead of being intimidated and sitting on the couch watching tv,  these women put on boxing or MMA gloves (that’s really fun to watch)  and they jab-cross,  jab-cross tick tock jab-cross, they upper cut hook bob and weave.  They round kick the heavy bag until they are sweating and gasping and exhausted….but they keep on going. And they are getting better every single week.

One of the ladies is a substitute teacher, totally dedicated to her family and she punches like a monster. She said her husband didn’t really believe she could punch…hard. She can.  So I gave her a couple of focus mitts  and told her to let her husband and hold for her while she punched.  She came back  this week all smiles and said her husband backed up while she was punching.

Here’s the reality, most of us stop learning anything new once we turn thirty. We just repeat our actions because it’s safe, it’s what we know. We won’t look like idiots.

Adults who start any martial arts program, from taekwondo to kickboxing, are heroes to me. They are brave and smart and strong. And they aren’t afraid…of anything….at any age.

When we stop learning new things, we stop growing, when we are more afraid of looking like an idiot than growing… we have officially gotten old and broken down.

Stand up and be brave. Do something new and you’ll be honoring my middle age kickboxing class and this beautiful life God has given you.

One thought on “Get Off The Couch and Be Brave”