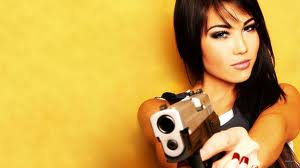 Maybe there is a glass ceiling for girls. Maybe women don’t get paid what men are paid. Maybe sexism is alive and kicking in America.

But in the world of country music women get away with murder, literally. They get to say and do things that would get men  deep fried by Dr. Phil and Dr. Oz, in People Magazine and probably by a judge.

If Toby Keith released a song called, “I’m Gonna Make Her Pay” then sang about keying his girlfriend’s car, slitting her tires and smashing her headlights with a baseball bat…. Nashville would implode … Johnny Cash would come back from the dead to kick Toby’s ass, guitar strings across the South would suddenly snap. Law suits would be filed and his records would stop selling.

But that’s exactly what Carrie Underwood did in “Before He Cheats”.

” I dug my key into the side
of his pretty little souped up 4 wheel drive,
carved my name into his leather seats,
I took a Louisville slugger to both headlights,
slashed a hole in all 4 tires…
Maybe next time he’ll think before he cheats.”

“Yeah, I’m gonna lift this house, spin it all around
Toss it in the air and put it in the ground
Make sure you’re never found”

Yeah, she’s gonna kill him and bury the body. Nice.

What would happen if Brad Paisley said he was going to murder his honey and make sure the corpse was well hidden? Girls can say anything, boys can’t. there’s a clear double standard. In the world of country music I can kill my husband with a kitchen knife and food processor then sing about it.  But he better not lay a hand on me. there’s only one place that’s acceptable for men…in the world of rap.

How about the troubled and always dangerous Miranda Lambert? In Gun Powder and Lead she sings,

” I’m goin’ home, gonna load my shotgun
Wait by the door and light a cigarette
He wants a fight, well now he’s got one
And he ain’t seen me crazy yet”

Miranda, you know smoking is no longer politically correct.  Shooting your husband is just fine but put that smoke down.

Weird thing, these are some of my very favorite country songs.

In the business and political arena women sometimes get a raw deal. But karma is a booger in the world of country music. We have women with bad intentions and fire arms.  So next time a man decides to screw over a woman, he better make sure she’s not a country music fan.

3 thoughts on “The Double Standard In Country Music”