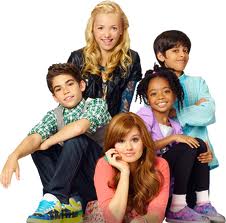 Have you watched the Disney Channel in the past few years, have you kids?  If so you probably don’t like your children very much any more.

If your nine year old rolls her eyes and sighs constantly. If she treats her father like he’s an absolute moron, easily tricked by a bad costume or fake sneezes, she’s probably been watching the Disney Channel. If your daughter has become excessively bossy and prissy as though she’s suddenly become  a member of the Royal Family blame it on the Disney Channel.

If your fourteen year old daughter dresses like Kim Kardashian on LSD and tosses her like a parade pony. If she’s a drama queen, and I don’t mean a run of the mill drama queen, I mean the kind that turns every issue, like unloading the dishwasher, if she turns every conversation with a boy, every B+ instead of an A,  into the North Korean Nuclear Stalemate. If she’s snotty, disrespectful and treats your Maid, Butler, Nanny or Baby Sitter like leftover Taco Bell trash…she’s probably watching too much Disney Channel.

And then there are the Disney Boys.  Most of them are stupid. They all seem to be overly feminine,  bordering on gay. They are afraid of everything, dark rooms, spiders and especially the girls who yell at them all the time. Disney boys tend to be weak , indecisive and easily led astray by the loud and very  demanding girls. And they scream a lot, like little girls.

If one of my children acted like the kids on the Disney I would be horrified. I would also lock them in their rooms until they developed a soul or back bone. I’d rather have my off-spring act like the kids on Saved By The Bell, Welcome Back Kotter, The Cosby Show hell even Married With Children, Modern Family or the  Simpsons would be an improvement.  Because today’s Disney kids are so annoying.

So, if you find yourself looking for any  place to go after work, instead of heading home to your family, you might need to cancel the Disney Channel.  Of put a trailer on the front yard until your kids graduate from high school.

Today I read an Associated Press article from Seattle encouraging parents to change channels if they wanted their kids behavior to improve . But they wanted parents to switch from violent show to educational.

4 thoughts on “Disney Is Turning Your Kids Into Brats…Seriously”