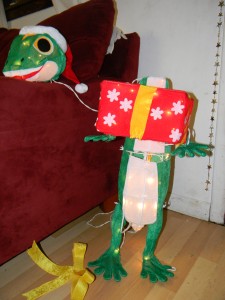 The tree is up and looks lovely. Yesterday we started hauling Christmas tubs out of the shed and I realized there are several signs of Christmas in Hampoland.

Some of them happen year after year others just started this year.

1. Before the first light is plugged in Alex and I start bartering and haggling. Is it a tinsel year? Is it a flashing light year? I hate both and he wants to make our tree flash like a  landing strip. If Alex were allowed to decorate on his own, I promise you, our living room would look like an Elf threw up after eating Skittles.

2. We all look at Theo, our great big (120 pounds) old dog, and think about putting a Santa hat on him. He’d look so funny and cute with a Santa hat. But he give us “that look” and we know he will eat our arm and be embarrassed.

3. Lex will find our “Striper Angel”. She used to look elegant now she’s just tawdry and she has somehow outgrown her angel gown.  Lex spins her around, “see, her butt hangs out of her dress”. How did she gain wait in the Christmas box?

4. At some point Sandor, who is now ten, will put on a Santa hat and do the moonwalk in his underwear.

5. Alex and I will argue about lights on the outside of the house.  I like nice straight lines and he just flings a bunch of stuff up. It looks like  a sixties LSD flash back.

5.This year I bought a new lighted ornament. It’s a four foot lighted lizard, holding a Christmas package.  But he keeps falling over, then his head pops off so the new member of our Christmas family is a headless Gecko. I still like him.

These are just a few of the signs of Christmas in Hampoland. I promise you, there will be more.

*What happens at your place. Peace and joy…yeah, right.