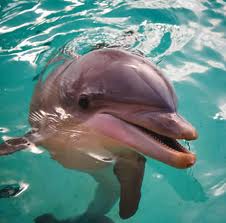 Sure, dolphins always look like they’re smiling, are you sure it’s a benevolent smile or is it an evil one, like a pirate right before he makes you walk the plank?

When I was in my twenties I lived in the Florida Keys and managed to land a little job working with an old female dolphin. I’ll call her Sweetie. She lived in a fenced lagoon at an ancient resort on the Gulf side. Three times a day Sweetie was fed buckets of fish as tourists looked on, cheering and clapping.  Sounds sweet, right?  Well, it was…if you were on shore.

Sweetie was a big dolphin,  especially for a female, weighing in at over six hundred pounds. For years and years she had handsome young men dedicated to her care.  They loved her and Swettie adored them.  I was the first girl who had any real contact with Sweetie. And she didn’t like it, in fact, she wanted to bury my ass at the bottom of her lagoon. Nobody realized her intentions during my two weeks of training. She acted like a lady. Then the abuse began.

Here’ s how our show went. First, I would stand on a dock and introduce myself and Sweetie to the audience. I would ask her to do a tail walk and sometime she would….sometimes she wouldn’t.  Then I would ask that beautiful creature to” find me a present” and I would give her a signal. I would point to the lagoon then tap the palm of my hand.

When the boys, Bob and James, did this trick, Sweetie would swim away then return with something wonderful. Everyday she found them, a pretty shell or rock, sometimes a snorkle, lost jewlery or coins.  People dropped all kinds of stuff into her lagoon.  When I stood on the dock in my bikini and asked for a present she always dropped an enormous glob of seaweed into my hand. Once she even put a turd of some kind in my palm. All I could do was smile while she laughed and spit water in my direction.

Next, I walked to a diving board and stood 15 or 20 feet above the tropical water holding a fish by the tail.  Sweetie would swim a couple of laps to get her speed up then leap, like a gymnist with a blow hole, straight up, grab the fish from my hand, then fall back into the water with a magnificen splash. It was a georgous sight.

Next, I did an elegant swan dive into the warm water, waited for her to find me so I could grab her dorsal fin then she’d pull me back to the dock.  She slid past the boys gracefully, slowly, gently, so they could easily grab her fin. When I dove in the water, Sweetie circled the lagoon like a bull then “accidently” hit the back of my thigh at twenty or thirty miles an hour like a 600 pound torpedo.  She dropped the boys off inches from the dock. She generally left me at least fifteen feet away, so I had to swim in, wondering if she was going to hit me again.

The back of my leg was purple and black for weeks, as though I’d been hit by a car. Still, I had to smile as I climbed up on the dock and waved to the tourists.

The final trick of the day was easy, I touched my cheek and asked Sweetie for a kiss. When the boys asked, you can bet the kiss was a sweet thing, perfectly placed on their cheek, with a light touch.  When Sweetie kissed me it was a little like getting punched by Mike Tyson.  She felt the need to get a running start then hit me with astonishing  force that made the audience gasp than laugh, thinking it was part of the act.

After three weeks the marine mammal abuse was too much.  Jack and Mary were only two and three years old at the time, but I wouldn’t let them come to the show and watch….it was just too violent.

You know, we always hear about the dolphins who saved sailors and shipwrecked swimmers, but we never hear about the people dolphins drag out into the depths. Because they ended up drowning, or eaten by sharks!

yeah, dolphins are really really smart. My career as a dolphin trainer ended as quickly as it began. Sweetie won and my hands still smell a little fishy.