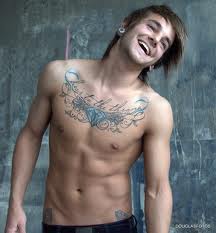 My best friend has a daughter. Her daughter, Sara, who is 18, beautiful, brilliant, in college and she has a new boy friend.

Last night I went to the house to meet this new fellow. I’ll call him Stu.

Well, there he was, very tall and stick like, with long black hair. He was wearing a pair of ragged dirty cut off jeans and a tee-shirt. Stu also  had a very handsome face and a whole lot of tattoos. And when I say a “whole lot” you need to trust my estimation. My son has eight or ten or twelve  and Stu had him beat. There was a massive word written in old English on his chest and then flurries of ink here and there. (However he did not have any on his neck or face).

My first impression wasn’t terrible.  But I was thinking, “Sara, you are so beautiful and smart. What the hell is wrong with you?”

Stu was kind of a handsome, grungy mess. But as we stood in the driveway, he slithered under my friends van and started removing her spare tire. I was stunned. First: He looked as though he knew what he was doing with the tools and spare and this is sometimes unusual for kids these days. Next: He was being really helpful though he and the girl had only been dating for a week or so. And he was actually helping the mom, rather than texting or playing video games. I was impressed.

Then we all went into the house and Stu did not disappear. After washing his hands, he hung out in the kitchen with the adults and talked. Stu with all his tattoes, was growing on me.

Truthfully, I was waiting for him to say something horribe or shocking, I figured he would drop the F bomb or say he respected Charles Manson or tell us all the things wrong with the United States.  He didn’t do any of that. He just flipped his long hair back and was pleasant. THEN, as we all left the house… Stu did the unthinkable, he held the door open for me.  Was it possible this hipster hobo fellow was actually a gentleman?

Needless to say I am a confirmed “Stu Fan”. But I am kind of sad because as a parent I’m so easily impressed.  Thirty years ago a boy who changed a tire, held the door open for a lady and talked to adults rather than playing WOW wasn’t unusual. Now, we are stunned and delighted by the simplist acts of civility.

Still, I’m so happy for my friend because, as any mom with a daughter will tell you. A good boyfriend is hard to find.

I have one additional note. Today, as I was leaving Wal-Mart I recognized a man I’ve  for years. He’s a very popular tattoo artist. I was walking in front of him then we started to chat. “Hey,” he said, “Just to give you the heads up, the slit in your skirt is probably a little more than you want.”

I reached behind to feel my skirt. Holy Cow, the slit was supposed to be three inches but it had torn so anybody walking behind me could easily see my pink and white stripped panties. I was horrified but laughed. “That’s not good, thanks so much for telling me.”

He shrugged, “Actually it was good, but I thought you should know.” So, the 40 year old tattoo guy flirted with me and saved the day. Not bad.

2 thoughts on “Boyfriends With Tattoos”