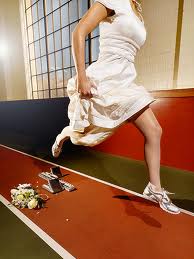 Should you marry her? I don’t know, but here are some rules and thoughts about marriage you might want to consider.

2. Don’t marry him person if you are already sitting in restaurants together poking at your mashed potatoes in silence. You don’t want to be that couple. If you can’t find anything to talk about now, it’s going to be a long silent marriage.

3. Finally, don’t marry them if you don’t have the same philosophy on child discipline. Almost everything can be negotiated, religion, politics, even television differences can be worked out. But it’s very hard to compromise when it comes to the kids. If she believes in spanking and you think it’s stupid and ineffective, don’t get married. If he thinks letting kids watch R rated slasher movies is cool and you’re a PG kind of person… don’t do it.

5. If everyone in your family and all your friends don’t like your soul mate, you need to slow down. Maybe he’s a creeper and you just can’t see it.  If the people who love you want to protect you from your bride to be, listen to them. I say that knowing full well you won’t but I had to say it anyway.

And always remember,If love makes you cry, if it makes you miserable, if it doesn’t make you feel like a better and stronger person…don’t marry them. In short, if love hurts you’re doing it wrong. And if you don’t have fun in Wal-Mart don’t say “I do”.

This is a re-written version of a story from 2010. I thought it was worth repeating.

Let me know what you think. Comment or hampoland@gmail.com

One thought on “You’re Going To Marry Her? Really?”