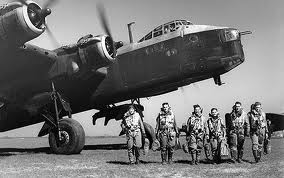 One night, after hours of drinking, Dad stood up to address the gentlemen in the club. Imagine a brash teen aged pilot, surrounded byolder  British officers, drunk but determined and sincere.   He told the band director they should play his national anthem as well as God Save The King.  He was fighting for their country, America should be recognized. The band leader acquiesced and agreed to play the United State’s national anthem before God Save the King.

One thought on “God Save The King from An Arkansas Boy”