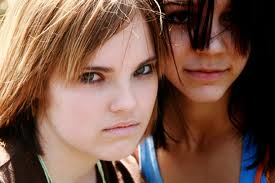 I’m pretty sure this happens to every one.  There’s a mean person in your life, I mean a back stabbing, gossip spreading, kitten kicking wench. She works in your office, goes to you PTO meetings, maybe she’s your cousin or sits next to you in biology.

This horrible person doesn’t like you, she doesn’t seem to like anyone, except her evil twin, the one other person in the class or office who is equally as vile. At night they probably talk on the phone and come up with new ways to cook puppies and make your life miserable.

When you run into the witch in the store or kitchen you nod, don’t you? You still say “hi” and smile, even though you don’t want to.  And she smiles back, as though she actually likes you, but doesn’t respond.

Then one day, Hildagard the Horrible does or says something nice and seems sincere. She leaves a couple of concert tickets on your desk because she can’t go.  She says your new hair cut looks nice. And then she actually sits down next to you at the Band Booster meeting or in your office or in biology…. just to visit. But she starts talking about other girls and women right?  She’s trashing them and trying to get you to be on her side. Don’t do it. She’ll say the same stuff about you next week.

It’s shocking, right?  This kind of thing scares me to death becasue I want to trust her but I know there’s something funky going on. I know I should forgive her and hope she remains nice. But last week I was told she thinks I have a scrawny flat and a big mouth. (Even if she’s right it’s a mean thing to say.)

I used to think this revolting and vicious behaviour started in girls when they got to high school.  Nice girls get boobs and suddenly turn into cut throat little bitches, who smile sweetly as they disembowel your best friend. But recently I noticed something really interesting. It’s the stupid girls who are pretty, who turn really mean.  Maybe their lack of intelligence makes them insecure. It’s so pathetic.

Last night  I watched Toddlers and Tiaras. Guess what, it doesn’t start in high school, it starts with the mothers.

Listen if you have a daughter who’s turning into a bitch…do something about it. And if you are raising your little girl to be a cut throat snake who thinks she’s better than everybody else in her kindergarten class you are making a huge mistake. And chances are, eventually she’ll turn on you too.