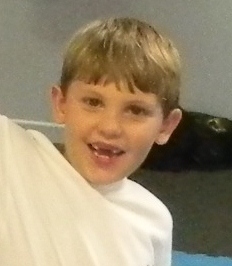 I had three little boys in the back seat of my car, squirming like puppies. One kid was mine, one hangs at our house a lot, the other was a new addition. I like this new boy but he doesn’t have bad manners. He’s got NO MANNERS.

“No Manners”, means I can’t get mad at him right away.” No Manners” means nobody in his life ever insisted he act right. Nobody, including his parents, ever looked at him crossed eyed until he said “thank you” or “yes ma’am”. “No Manners” means I have to explain to him how I expect him to act at our house for a couple of weeks before I can get mad at him for being rude.

So, I’ve got three smelly eight year olds in the back seat, rolling and laughing.

“Everybody got their seatbelt on?” I holler.
‘Yes ma’am” I hear from two boys.
“How you doing Joey? You all belted up?” I ask of the third boy, who has “No Manners”.
“Yeah.” he says.
I watch my kid elbow Joey but he doesn’t get it and I realize I have to try a different tact.
“You ready for some food, Jacob?” I ask of the kid that stays at our house all the time.
“Yes ma’am!” he shouts like a tiny blonde Marine.
“Good answer,Jacob!” I shout and stick my hand into the back seat for a high five.
“You guys ready for some food and football?” I yell at them all.
“”Yes ma’am!” my son and Jacob shout, competitively, trying to outdo each other. And then they laugh.
I say, “I’m pretty sure Jacob won that time, Son,”  Jacob does a little hapy dance in the back seat.
Our new boy watched Jacob and my kid, he was figuring out what was going on, It was the Good MANNERS GAME It’s a competitive sport. He wants to figure out how to win. That means he’s interested and that means I can train him.

I know that sounds weird, that I would try to train a rough cut little boy to have better manners, like a dog or a boxer.  But as the great MMA coach Danny Dring says, “You have to work with what you got.”

What have I got, a little boy with terrible manners, but I still like him.  The key is he’s a little boy. That means he’s competitive and likes to be the winner. If having good manners means he’s a winner, he’ll yell “Yes ma’am” in a heart beat.  Little girls like being winners but they really like the praise.

At the end of the day Joey’s manners were much better, mainly because he wanted to beat the other boys. But even when we were alone, in a C Store and I asked him if his drink was cold he said, “yeah,” then changed it to “yes Ma’am”. I gave him a thumbs up and he grinned. Everybody likes to win.