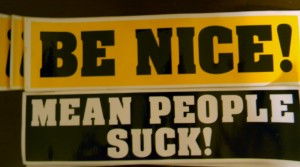 3 thoughts on “Mean People Suck and Be Nice!”