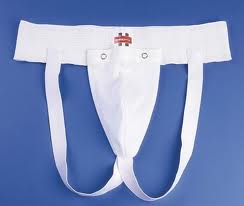 Buying that first cup or jock strap is a huge moment in a boys life; it’s pretty big for a mom too. Because it means you son is doing something possible violent and dangerous and you are so very very proud of your little warrior.

We had to buy Sandor his first cup when he was six, he’d been sparring in TKD for a few weeks, got nailed between the legs with a front kick and drove immediately to the sporting good store.

Sandor opened it in the car and spent the next fifteen minutes in the backseat pretending it was a boat and the entire gang from Scooby Do were floating in the ocean.
The next day when he went back to Taekwondo class and I explained what he ad to do with the cup he laughed until he drooled. then he told every kid in the building that he was wearing a cup. “Listen, I’m knocking on it,” he said and drummed his knuckles against his crotch. “You can punch me right there if you want, I’ll be ok.”  Then they all started punching and kicking each other and yelling, “Cup Check!”

A couple of weeks ago we had a big workout on a Saturday with several other Taekwondo schools. At some point I walked to the back dressing room. There was a tiny little boy standing in front of me in his white briefs. “Can you help me with this?” he said earnestly and tried to hand me his miniature cup.
I shook my head, “I’ll find you folks. Wait right here.”

Now Sandor is eight and the novelty has worn off.Thou last week in the car a younger boy asked him what a cup was for and he said, “You know, to protect all your important stuff, dude.” Sandor is so grown up now,he doesn’t really laugh when ask him if he put his cup it on before class or football practice. He just reaches into his pants to check. What a man.

I just realized yesterday I wrote about sports bras. I seem to have a theme going. I wonder what’s next. Leave me a comment.

One thought on “Your Sons First CUP CHECK!”