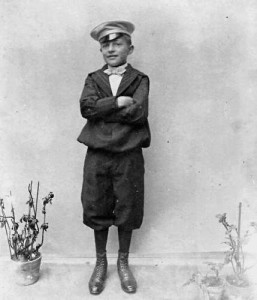 I am a big believer in the power of family stories. I think they help us all remember who we really are and where we came from. You can lose everything from guitars to dogs but nobody can take your history.

Fortunately I’ve been blessed with a very “oral” family. We yammer on and on. For generations we’ve been telling stories. (When I married Alex there was a cosmic hiccup in the universe because he was the first quiet member of our family in 200 years)

So, here’s one of my favorites from my grandmother Bubba.

Bubba, who’s real name was Ruth Ross, was born in Kingsland, Arkansas in 1895. She was the middle child of three and her brothers were named,(I swear I’m not making these up) Egbert and Delbert. When this story took place Delbert was around 12, Ruth was 8 and Egbert was probably 6.

Kingsland isn’t far from the town of Fordyce, Arkansas and one day, when Ruth was eight her father decided she was old enough to ride the train, with her younger brother, alone, to Kingsland, where Delbert would meet them at the station.

Her father, who was a small man with a gigantic mustache, gave her a dollar for the tickets and put them on the train with their suitcases, because they were supposed to spend the week with their Aunt.

Both the children were dressed up of course. Ruth was wearing a puffy yellow dress with a white sash and six year old Egbert had on his suit, suspenders and a cap. My grandmother was 98 the last time she told this story. Nearly blind, she would close her eyes and rub my hand as she envisioned her baby brother. She would lose herself in the memory and I stayed silent.

The conductor, dressed in black, came around and took the dollar from the children. The train started rolling and they waited patiently for him to return with their change. The train began chugging along, faster and faster, and still he didn’t come back with their change.

After fifteen minutes or so, the train began to slow down  to stop at the Kingsland station and still, the conductor hadn’t returned with their change.

Passengers got on and off the train and finally, the conductor appeared with their eighty cents. But the train was already pulling out from the Fordyce station.

So Ruth, grabbed Egbert’s little hand and they both jumped from the slow moving train.

Together they rolled and tumbled down the embankment, their suitcases popped open and all their clothes flew out. A shocked crowed gathered around then oldest brother Delbert appeared. He’s been waiting for them and was obviously annoyed. He pulled Egbert,who was crying, to his feet and as he brushed the dirt and grass off his suit said, “You silly little fool, that’s what you get for following a woman”.