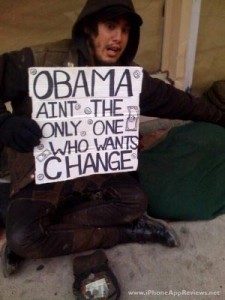 For months I’ve been going out of my mind because the government now gives free cell phones to poor people. If you receive any kind of government assistance, HUD, Food Stamps etc… you are eligible.

CRAZYNESS! I know I don’t sound very liberal or like a democrat or like a woman who voted for Obama,  but how can our government justify the expense of giving all those people cell phones. And why do they deserve them?

My annoyance only increased when my daughter Mary told me abut a group of kids that begs for money in front of Wal-Greens while texting on their iphones.

My family hangs on to middle class by our cuticles, my husband and I work hard for everything we have. Why won’t anyone give us a free cell phone? None of us have the kind of phone with a screen or key board, we all have flip phones, the same kind the government is giving away. That’s the kind of moaning and wailing I was doing when my friend, Dick Antoine, walked into my office…his face glowing.

“Guess what? I just talked to my brother in Las Vegas!” he announced happily.

“The one who lives in a box?” I asked because Dick has told me all about his brother who is homeless, 55 years old with a three foot beard. He lives in a box and only makes money when he sells his blood. Dick hasn’t talked to him in a few years.

“Yeah, he called me, he got one of those Obama phones. He gets 250 minutes a month. How bout that”!

Dick looked so happy because his brother in a box had a phone.

I think giving phones to people who won’t or can’t get a job is stupid and insane. But I’m happy Dick gets to talk to his long lost brother. Still, I am wondering how his brother will charge his new Obama phone in a cardboard box.