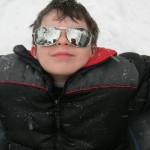 Sandor(pronounced shawn-door), who is eight had his first official football camp last week. He was absolutley jacked…two and a half hours of foot ball with other boys, slamming, hitting, catching and running on the high school foot ball field in 98 degree weather. What could be better?

I arrived ten minutes early to watch my boy. He was one of the smallest and pailest on the field, but that was fine. He’s got heart. I’ve seen enough sports movies to know that’s the important thing.

But as my boy walked toward the sideline I could see there was a  problem. His face was the color of a pomagranate. Before he could even hear me I started whispering “don’t cry, buddy, not here, don’t cry in front of all these boys and your coaches. Don’t cry, we’re almost to the car.”

As soon as he slammed the car door his face exploded. Tears and rage. My normally calm laid kid had gone smoking hot crazy nuclear melt down mad. “I hate that kid, I want to slam his face into a tree, I want to kick his teeth in, I hate him so freaking much.” He couldn’t stop screaming and crying.

Finally  he took a breath, “What the hell happened?’

He gasped like a sun fish on a hot dock. “there’s this big kid and he’s so mean and he talks trash.”

My bully alarm started ringing, I braced my slef for all the terrible things this boy was saying. “What happened?”

“He told me he was gonna take me down. And he called me a loser!”

“Are you the only one he said stuff to?”

He snuffled and wiped his nose on his arm. “He said bad stuff  to everybody.”

At home that night I realized we never ever say mean stuff to each other. Ok, sometimes we call each other “poop face” or “chicken baby cheese cake” . In Hampoland…that’s about as bad as it gets. Every morning when I drop Sandor off for school the same third grade teacher opens the door and smiles at him. Sandor picks up his backpack and I say “Be brilliant and kind and have fun.” Then the teacher smiles at me because Iappear to be a good mom.

So, that evening after football and the Sandor Melt Down, we decided to be mean to each other, all of us, in order to toughen up Sandor for football practice.  We laughed all night and talked trash, “Looser butt head”, “ugly little frog face”.  We were brutal.

The next morning when I dropped Sandor off Mrs. Currey opened the car door and smiled. I looked at Sandor and screamed, “Get the Hell out of my car you little looser”. Sandor just laughed and laughed as he ran toward the playground.  But the look on the teacher’s face was amazing. Everything was upside down and backwards and I was a horrible mom.  The moment was perfect. And I think he’s a lot tougher now.