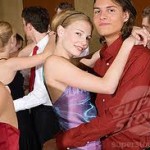 You are saying, “Woman, are you out of your mind?”
Before you stop reading , let me state my case and define dating. I don’t think you should allow your 13 year old to jump in a Chevy van with shag carpet and drive off with a 16 year old boy.

3.On the weekends you might take the boy with you to eat pizza or go to the mall. And if you are pretty trusting you might allow them to go to the skating rink or bowling alley, alone, during the day for an hour and a half. While they are skating they might hold hands, they will hug and they might kiss But not much more will happen because they are in a bowling alley waiting for you to return.. And while all this talking and hand holding hands is going on your daughter, will learn so many valuable first boy lessons. And after two or three weeks they will break up.
As a result of the breakup the most important lesson your daughter will learn is….there are lots of boys in the world so breaking up isn’t such a big deal.

My youngest daughter, Lexie knows a lot about guys even thought she’s only 14. She knows how to break up with a guy in person and in a nice way. She knows guys don’t like girls who get crazy obsessed. They like girls with a life, interests and self esteem.
And she knows you shouldn’t have to choose between friends and boy friends and if a guy really likes you he will always want what’s best for you. If he’s an actual good guy he won’t ask or demand that you to quite things you love like the band, volleyball or the Renisaiance poety club.

Because Mary hadn’t learned any boy lessons earlier so she fell for “toker69”: like a 12 year old girl, she fell like Romeo and Juliet. And she announced, as I placed the Thanksgiving turkey on the table, that she was leaving school for a year to be with the stoned hockey player She used all the classic first love lines like, “Nobody understands us.” “We’ll prove everyone wrong.”. “I’ll never love anyone else. It was so gross.

Mary didn’t’ want to hurt me or our family, her heart was just in charge and she didn’t have any prior love experience.. Unfortunately, because she was eighteen I couldn’t save her. I could cry and beg and holler, but in the end, that’s all I could do.
Mary’s pre-teen heart was completely overriding her magnificent, full scholarship, med-school brain.

It’s a messy and complicated story, and I’ll tell you Mary is great now so you don’t have to worry.. She dumped “toker69” after 9 months, got back into school and is much much wiser now. But here’s what I believe, If Mary had dated in high school she wouldn’t have been hopelessly naive about young men and love.

If she had dated a boy when she was thirteen, If I let her hang out at the bowling alley with her 115 pound 8th grade boy friend, Mary would have learned that boys rarely respect girls who give up their independence.

And here’s the real kicker, it doesn’t matter if you “forbid” your daughter to have a boyfriend. If she likes a cute guy with swoopyhair and he likes her she will have a boy friend. You just won’t know about it. And every time you drop her off at the movies or the bowling ally with a couple of girls, the boy will be waiting for her. And they will hold hands and kiss and she just won’t tell you about it.

Think of boyfriends like cars. You wouldn’t let you daughter jump behind the wheel, all alone, the second she got her license.  No, you spend two years driving around with her while she’s got a permit. You help her practice, you explain the rules of the road and help her look for danger.  Dating and boys  and cars are all  just the same.

What’s better…. knowing who the boy is, talking to him, and counseling your child or being in the dark and having your daughter keep secrets from you.

So, do yourself a favor. Let her have a boyfriend while you can control the situation, if she wants one. But make sure he’s the one that asks her out. Girls should not do the asking . And he can’t text it the question. If he wants to ask her out he needs to do it in person. And no matter what, when she’s got something to talk about, make sure you listen.

(this is reprint number #2, by request)