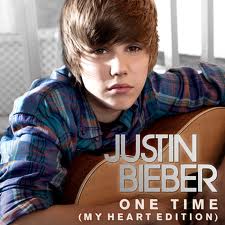 I’m going to defend Justin Bieber.  All you teenagers and 20 something hippsters, “Stop picking on the boy”.

Yesterday I was at a Home Show, thousands of families wandered around looking at couches and tile and I saw two pretty adorable little girls wearing Justin Bieber t-shirts.  The girls were five or six with pink tights, boots and shiny fake ear rings. When I asked them about Justin Bieber they went on and on in a very cute foreign Bieber language I couldn’t understand.

We need Justin Bieber so little  girls have somebody safe to love.  Would you feel better if the tiny little girls with pigtails had on Kayne, Jay-Z or GaGa Shirts? Of course not, you don’t want little girls crushing on women who sings about disco sticks or guys who wo sing about monsters, mavins and a ghetto university.

If  you are a seventeen year old high school dude, and you actively hate Justin Bieber, SHUT UP!  He’s not meant for you, lugnut, and neither are the new Volkswagen Beetle or Hannah Montana.  If you are old enough to drive, have a tramp stamp or get a latte at Starbucks, you’re not supposed to like or care about Just Bieber so leave him alone.  When you were little you had your own version of Bieber, remember the Spice Girls, Aaron Carter, N’Sync and The  Backstreet Boys?  Seriously, Bieber is actually better than all those guys.  Bieber can sing, for real, and he’s a musician, he plays drums, piano and guitar. So, Mr. Bieber already has 90 percent of the previously menioned pop stars beat.

The fact that Justin can really sing and his songs are fun and catchy, makes me happy. He doesn’t rely on a voice box (we’ve never actually heard Brittney Sing with out electronic help) In fact when he was on the Ellen Degeneres show he sang acapella just to prove he can really sing.

And he doesn’t take him self too seriously, unlike the average teenager. He never bitches about the stress  of being a teen, he never complains about the press or excessive stalking. And finally, I like Justin Bieber because he can make fun of himself.  From the Jimmy Kimmel show to SNL (the skit with Tina Fey was so great) and the commercial with Ozzzy

Osbourn, Justin Bieber constantly makes fun of himself and his swooooopy, girl-lovin style.

So Justin, I know you’ve been waiting for me to step up and defend you. I know you’ll sleep better tonight because Diana Hampo, in Hot Springs, Arkansas, has your back. But it’s not that big a deal, I’m just doing what’s right.