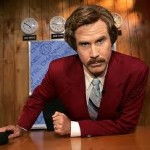 My husband looks like a redneck, pirate,  terrorist, long black hair, black beard, old jeans and a sweat shirt (unless he looks like a chef). And of course he always carries a box cutter, cause that’s what chef’s carry. But Alex has a very special knack. He can watch the news or morning programs with me and perfectly critique the commentators appearances.

“Did you see Lester Holt this morning? God, where are his make up people? he looks jaundiced today and the bags under his eyes could hold my entire closet.”

This from a man who gets annoyed when I ask him to put on some clean sweats pants. I don’t get it.

When we watch our local Arkansas news he goes crazy because so many of the news women don’t know how to dress. “Why would anyone let her wear a short jacket like that, it makes her hips look like Oklahoma.” He’ll get me out of the kitchen saying “The belt on this woman is ridiculous with that dress, too thin and high, it makes her look like she’s got no waist and huge boobs.  What were they thinking?”

But ninety percent of the time he’s right. The local news folks should hire  him as a consultant. Everybody would look a lot better. They would just have to ignore his quilted flannel jacket and wretched jeans.

I look at him, the Arkansas Terrorist Pirate Chef guy, and wonder what planet he came from. Then I realize I don’t have any make up on and vault out of bed because I know exactly what he’s thinking.

So, I’m not allowed to ask you to look at the ads but I think I can ask you to share this with a friend if you like it. thanks DH