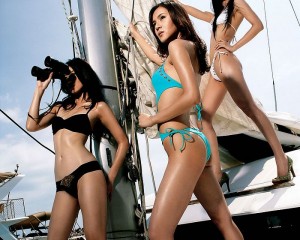 I’ve got a secret to share. You may not know this but the media manipulates and lies to us, all the time.  I’m willing to pinky swear on this one.

For years they tried to convince women that men actually liked flat chested girls. Ever magazine was filled with women who had the body fat of a pretzel and no breasts at all. Models were proudly rockin’ the 34 A as though that’s a good thing. But wait , most boys like boobs. Don’t believe me? Ask one…right now.

And if you need further proof call any plastic surgeon and ask  if he does more breast reductions or breast enlargements. The ratio is something like 68:1. Girls get boob jobs because guys like big ones, they always have. Still for 30 years magazines were full of models with the bodies of 9 year old boys.

Now the table has turned and guys are the victims. These days, if you look at male models in magazines you’ll see ripped young men with absolutely no body hair. I mean these dudes are slick and smooth as newly born otters. I googled “Cosmo Men” and all the guys I saw pictured, for the last five years were stunningly hairless. Ouch…first, let me say shaving or waxing that large an area must be painful and really time consuming.

But you know what? I don’t think most girls over the age of 21, really like a guy that shaves more than she does. Chest hair makes a man look…well…like a man…like there is a genetic difference between men and women. Most girls want to date boys, not “kind-of-boys” or “almost men”.

Now, in the South not many guys have taken up the high fashion, “Metro” habit of shaving…everything. Walk into any Wal-Mart and you’ll see plenty of hair under the camo shirts. But travel up north, to California or to big cities and “Metro” is in in in. Because guys in those places read magazine and watch shows like “What Not To Wear”.

But guess what? Even girls up north secretly long for a guy with some chest hair. In their dreams they long for a man with testosterone rather than the new Gillette Fusion Pro Glide. And here’s my proof.

Last week my son Jack, who is 23 and bar tends in a Go-Go Bar in Manhattan called to tell me the weirdest most disturbing and fascinating thing.  Jack is tall and really swarthy, he’s got enough black chest hair to cover several small dogs. At least once a night girls, pretty New York girls, will compliment his chest hair. Often times they ask to touch his chest hair ! (yeah, as a mom this totally creeps me out but I must report the facts).  Jack even said, “Mom even straight metro guys will say stuff like ‘dude way to rock the chest hair'”. I promise you I’m not making this up.

So guys, don’t be victims like women were for thirty years. Don’t believe what you see and read in the media. Most of it’s not true.  Guys like boobs and women like a little hair. However most women absolutely positively  do not like back hair, that’s not good or sexy.

So, now you understand why I believe the media isn’t always 100 percent truthful. Next week maybe we’ll talk about the year 2012, Global Warming and the Grassy Knoll.