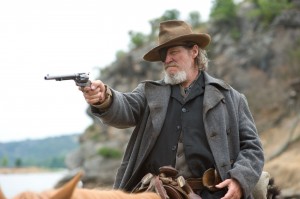 For the first time in a year, Alex and I went to see a movie. TRUE GRIT! I was worried it would be lame because I remember the original  with John Wayne and Glen Campbell.

But the Coen Brothers know how to make a movie with guns and gross guys. The new True Grit is outstanding. Jeff Bridges is a fowl and nasty one- eyed Rooster Cogburn but when he puts the reins in his mouth and starts blowing up bad guys with both hands, all is right with the world.

Hailee Steinfield plays the brilliant but annoyingly stubborn and precocious Mattie Ross. Man, that girl can talk and talk and talk. But what I really loved was her perfect, fearless, nerve,  sun drenched 14 year old face. When she rolled and licked a cigarette for Rooster Cogburn she owned the audience.

So, True Grit is a great western, well worth the $8 dollar tickets and $16 dollars in popcorn and Sprite. But that’s not what we need to talk about.

The theater was full of grown up couples, 45 and older. I’m going to call this age demographic “Super Adults” rather than middle aged. Middle Aged involves two words I don’t like. So, Super Adults from now on.  Apparently, “Super Adults” like going to the movies (and they have the disposable income to do it)  if there’s a plot and it’s well written. And “Super Adults” for the most part don’t need something to blow up  every three minutes so “Super Adult” movies are probably cheaper to make. “Super Adults” don’t need as many sex scenes either because most folks don’t really  want to see naked old people.  As I understand it, the movie industry is currently struggling , so maybe they should think about “Super Adults” more.

Recently, we rented and watched The A-Team and The Expendables. I was looking forward to both but they were so freakin’ dark I couln’t tell what the hell was going on. Even the daylight fight scenes were lost in close ups and shadow.  Movies so dark that you can’t see what’s going on piss me off and are stupid. Turn on that damn kleeg light Mr. Director Guy.

The Coen Brothers washed True Grit in a dirty Arkansas light so I could see every oozing bullet hole, stinking sweat stain and Ned Pepper’s rotting teeth. Thank you Joel and Ethan. That’s what I paid for.