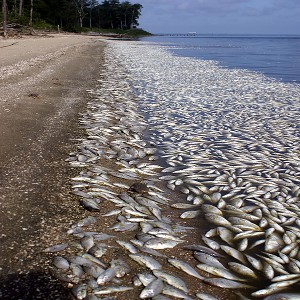 In one weekend here in Arkansas thousands of black birds fell, dead, from the sky on the town of Beebe ( our Governor’s name is Mike Beebe, I wonder if there’s a connection) . Then 100,000 drum fish (an ugly ugly bottom feeding fish) washed up on the banks of the Arkansas River.

As you can imagine, the rumors and ideas are spreading like peanut butter, but nothing sounds even remotely plausible.  One theory: A hail storm killed the birds?  If that was the case wouldn’t the birds be all banged up? Wouldn’t their feathers be falling off and covering Beebe? There’s the idea that a fire works display made all those birds have heart attacks at the same time?  But there are fireworks all over  America. Do we have a special breed of wimpy black birds?

One of the strangest ideas I heard about the dead birds goes like this.

Beebe residents and farmers hate the birds. So, they sprayed thousands of them with Dawn Detergent, that messed up the oil on their wings. Then, when the birds flew up high, they froze to death. But how did the farmer get all the birds to take a Dawn Death Shower.

And then there are those who feel this is a truly apocalyptic event and Jesus is coming back…to Arkansas. Everybody loves the Razorbacks.  But I’m not buying that, Jesus doesn’t need to be escorted by dead birds and fish.

Both the  dead fish and dead bird stories are all over the Internet.  The dead Drum Fish even made the celebrity web site gawker.com along with Lindsey Lohan and LeeAnn Rimes ‘new boob job.

According to State officials, the autopsy results on the birds should be finished in a week but the fish results won’t be in for a month.  That doesn’t seem right. Kind of suspicious, right? Shouldn’t all dead animals be given the same treatment.  Maybe it’s time to call Rev. Al Sharpton.

Here’s what really worries me…the clean up. Ok, picking up 3,000 dead birds isn’t that big a deal but how do you clean up 100,000 dead fish. Where do you put all that rotting fish flesh?

State officials have instructed Arkansans not to eat the dead birds or the dead drum fish. Maybe that’s the most important thing to remember from all of this along with the fact that kick off for the Sugar Bowl is 7:30 Tuesday night and the Razorbacks are gonna crush Ohio State.