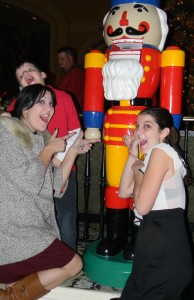 I’ve got great news for middle class and lower middle class Americans. Because our financial situation was pretty bleak this year, my husband Alex and I spent about $1,500 less on Christmas for our family of six.

And guess what? I swear to you, It was one of the best years we’ve ever had (except for the fact that my son Jack was in NYC. Snowed in, sucks to be him this week).

Alright, here’s the Dr. Seuss moment I promised….apparently Christmas really isn’t about the money. I swear we did not do any of the folksy/crafty stuff that some people do at Christmas. I didn’t knit my children underwear, we only made one batch of cookies. I did make a vat of Chex Party Mix, thinking I would give it away, but I ended up eating it all myself and getting sick.

We simply gave fewer presents this year but we still had just as much fun. On Christmas morning we had ridiculously good time eating beef jerky and trying to bounce ping pong balls (Santa put those in our stockings though we do not have a ping pong table) into a garbage can. We had just as much fun with the Jenga blocks as we did with the new WII Game (we only bought one twenty dollar WII Game though we discussed getting three). And Sandor loved the presents  from Big Lots as much as he liked the stuff from the Department store.

We shot each other with knock off Nerf Guns.The actual Nerf stuff is super expensive and all the bullets get lost anyway, right? And we watched A Christmas Story on TBS throughout the day.

Mary bought super goofy books on the clearance table at the book store so we all played with a Dinosaur Pop Up Book and one called How Many Elephants in A Blue Whale?  The answer?  It takes 25 elephants to make a blue whale. And Alex bought Lexi some toe socks from a guy on the side of the road…3 pairs for 5 dollars!

Our friends, Katie who is 14 and Sambo who is 19, came over then we piled up on the couch to watch Rocky IV. That’s the one where Rocky beats the evil Russian empire and the roided up fighter, Ivan Drago. Nothing says Christmas to me like pounding some Russians.

That was our Christmas and it was so beautiful and actually pretty cheap. I guess what brings joy to our family are the stupid and beautiful traditions, not the gifts.

I can’t believe it’s taken me this long to figure all this out. Maybe I should have been watching How The Grinch Stole Christmas instead of Rocky every year.

* My friend Cara has a great blog at http://thebargainhuntingmommy.blogspot.com/ and it really helped me save money this year. She’s a well dressed cheap-o.