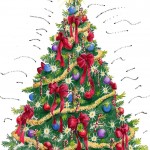 It’s important to be thankful for things and right now I’m very thankful that my beautiful Christmas tree doesn’t stink. Last year it did.

I’m not saying we had a crappy Christmas tree, it was beautiful, but it smelled like death and poop. We didn’t realize there was something wrong with the tree until it was in the house and decorated. As the lights sparkled and shone, warming the Frasier Fur branches the tree started to reek. I mean, it smell like a dead cat was stuck in there.
People come over and squinted because of the odor and I had to explain, “it’s the tree, something is wrong with it.”

We literally searched it’s branches, thinking  there was a rotting animal corpse hanging next to an ornament. Or sweaty boxer hiding in the corner.I sprayed it with lysol and pine freshener, nothing helped. It was awful and embarrassing. People speculated, once we assured there there wasn’t a dead creature hanging around, maybe a skunk sprayed our tree, maybe it was covered in some malfurious chemical. It was so bad the kids were afraid Santa would back out of the house, offended by the odor. How could something so lovely smell so freaking terrible.

Finally, I tucked a whole bunch of fabrich softner sheets between the branches. That almost helped.

Generally, I put off taking down the tree. I’ve been known to wait until late January because I love our Christmas trees and hate packing up the ornaments. Not last year. December 26 I yanked that putrid bad boy down, threw it in the yard and set it one fire. I waited for screaming noises
(maybe the tree was posessed) but I heard nothing but the crackeling of burning pine.

So this year I’m trying to be more thankful. My tree smells just fine and life is good.