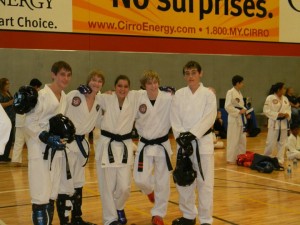 A couple of weeks ago,  Lex and I went to a Taekwondo tournament (yes, we are deadly martial arts geeks) in Plano, Texas. We live in a community outside Hot Springs, Arkansas.

I’ve got to say, it was a shock traveling from one of the poorest states in the country to a city with velvety interstates, cat hospitals, gymnastic day schools and a community sporting facility with 15 indoor basket ball courts. Do you know how large a building it takes to hold 15 basketball courts, plus an indoor ice skating rink and roller skating rink?

Hot Springs is much prettier than Plano, we have mountains and trees and lakes, they have shopping centers, but boy, every time I took a breath I thought, “Now this is what money smells like, and it’s good!” Plano, Texas smells like hundred dollar bills fanned infront of your face.

Now, I understand how folks get seduced by cities with money, even if they are ugly.  I immediately felt like a bad mom because I don’t have a place to take my kids for golf, ice skating, basketball, and equestrian lessons. Are the kids in Plano better off? They sure do have more stuff and activities and coaches.

I was going to write about the smell of money but I realize what’s eating  at my brain is this question.  “Does money make you a better parent?”  If so, my kids are screwed because we are one block from destitute.

Still, during the Taekwondo Tournament, I realized those Texas kids, with all their “Facilities , Play Structures,  Superior Schools Districts, Cat Hospitals and Coaches” were, for the most part, just like Arkansas kids.  Some of them were talented and some of them were spoiled,  cry-baby losers.  Some were gracious and shook hands with the judges and some had  linguini hand shakes and couldn’t make eye contact with adults.  Some won, then hugged their opponent others lost and made excuses. Some of the parents were kind and some complained about everything.   Arkansas kids and Texas kids…they are pretty much the same. Maybe money isn’t a major factor when it comes to parenting.

I do want to point out one great thing about Texas. Driving back Lex and I stopped at gas stations, Taco Bell and truck stops, and we noticed, TEXAS MEN ARE BETTER AT OPEING DOORS. That’s right, Arkansas guys, you need to step up because even the thugs, possible muggers and losers were great about opening doors for women, and most of them did it with a grand sweeping motion that made it even better. When we smiled and said “thank you” they said Rhett Butler stuff like, “my pleasure, mam”.

So kids, you are apparently all pretty much the same weather you play base ball on a perfectly groomed field or a weedy lot. But guys, the Texans win. When it come to being gentlemen Arkansas boys need to go old school and open the door. And in return…well, you never know.