I’m watching the Miley Cyrus “Who Owns My Heart” video.

Yikes, I’m thinking BP Oil is in charge of this girl’s career. 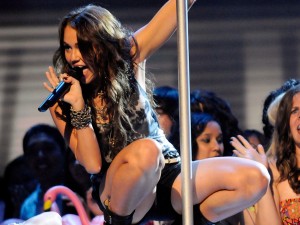 . And that’s why it’s become so nasty, slippery and plagued by disastrous decisions.

Mily is seventeen but her video opens with her lying in bed wearing a bustier and blindfold. Then she dances and writhes and kind of sings.

I’m not bothered so much by that all that, but it’s killing me that Disney is letting her continue to be Hannah Montana and Wal-Mart is pushing her clothes line to little bitty girls. Do they get the blind fold with the be-dazzled Hanna Montana tank top?

Wait, it gets better, half way through the video an ad pops up that says, “Do You Want To Be A Disney Star’?

And then there’s the “Cant Be Tamed’ video. It’s pathetic and horrible in an entirely different way. What’s so sad is Miley, with all her worldly experience, doesn’t actually get it. In the video she’s introduced as the “rarest creature on earth”…..But there are millions of Mileys, desperate to move from tween/teen to adulthood. They try to prove  they are adults by acting sleazy. American high schools are over run with these girls. In an attempt to prove to the American public that she’s different, special, unique and grownup Miley Cyrus has simply transformed herself into “predictable”.

One thought on “Miley Cyrus Now Managed By BP Oil”