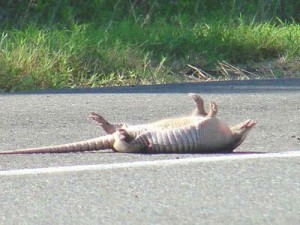 But last week I did four things that might be almost as dangerous as texting…while I was driving.

#1 Don’t order a crunchy taco at Taco Bell while driving. I know, you think you’ll wait to eat it, but the minute that bag hits your passenger seat the magnificent greasy Taco Bell smell will fill your car. You’ll say, “Just one bite”. But when you take a bite, lettuce will fall between the seats, ground meat will hit your thigh and shredded cheese like food will end up on your shirt. You’ll try to pick it up, strand by strand and eat it, you will try to clean up the mess, you will search for the shreds of lettuce and cheese and then, you’ll try to take another bite. It’s a no win situation. Do not eat crunchy Taco Bell tacos while driving.

#2 This is an old and obvious danger but it needs repeating. Don’t try putting on makeup while driving, even if you are stopped at a red light. And especially if you are a guy because you are probably inexperienced.  The light will change and you’ll have to finish the eye liner. Then there’s the lip stick, you’ve got the visor down and you are watching the road and your Perfect Plum lips at the same time. You’ll smack your lips, trying to even things out and crash into a bank building.

#3 Don’t try to identify road kill while you are driving.  Sounds weird but I think we all do that. Squint, sit up straight, lean forward, “is that a raccoon or a ground hog”?  Maybe I spend too much time with my seven year old who gets freaking giddy when he spots something dead on the road. If it’s a dog, he want’s to figure out what breed, Labrador or Rottweiler? in the 2 seconds it takes to speed past.  And I’m right there with him…slowing down to 30 in a 55 mph zone to identify a chipmunk. If it’s dead, don’t look, if you have to look pretend it’s a tire tread.

#4Don’t try to floss while driving. It starts when you are sucking on your molar, trying to free that piece of pork.  That won’t work so you smile in the rear view mirror and see the black spot. You whip out the mint flavored floss and the next thing you know you’re driving 60mph with your elbows, grinning and leaning forward, into the mirror with floss between your teeth. It’s a very bad situation. If you don’t wreck, that guy that’s headed towards you will be totally freaked out. He’ll say to his wife, “Is that stupid bitch flossing while driving?” just as he crashes into the bridge abuttment and his car bursts into flames.

So, there you have it. Driving and texting is deadly, but there’s other really stupid stuff out there and you should avoid it all.